It was my sister's birthday today, and she requested a cake like this one. Except she wanted it to be a complete sphere. And she requested chocolate cake so we had to fudge a little (pun only partially intended) on the actual layers of the earth. 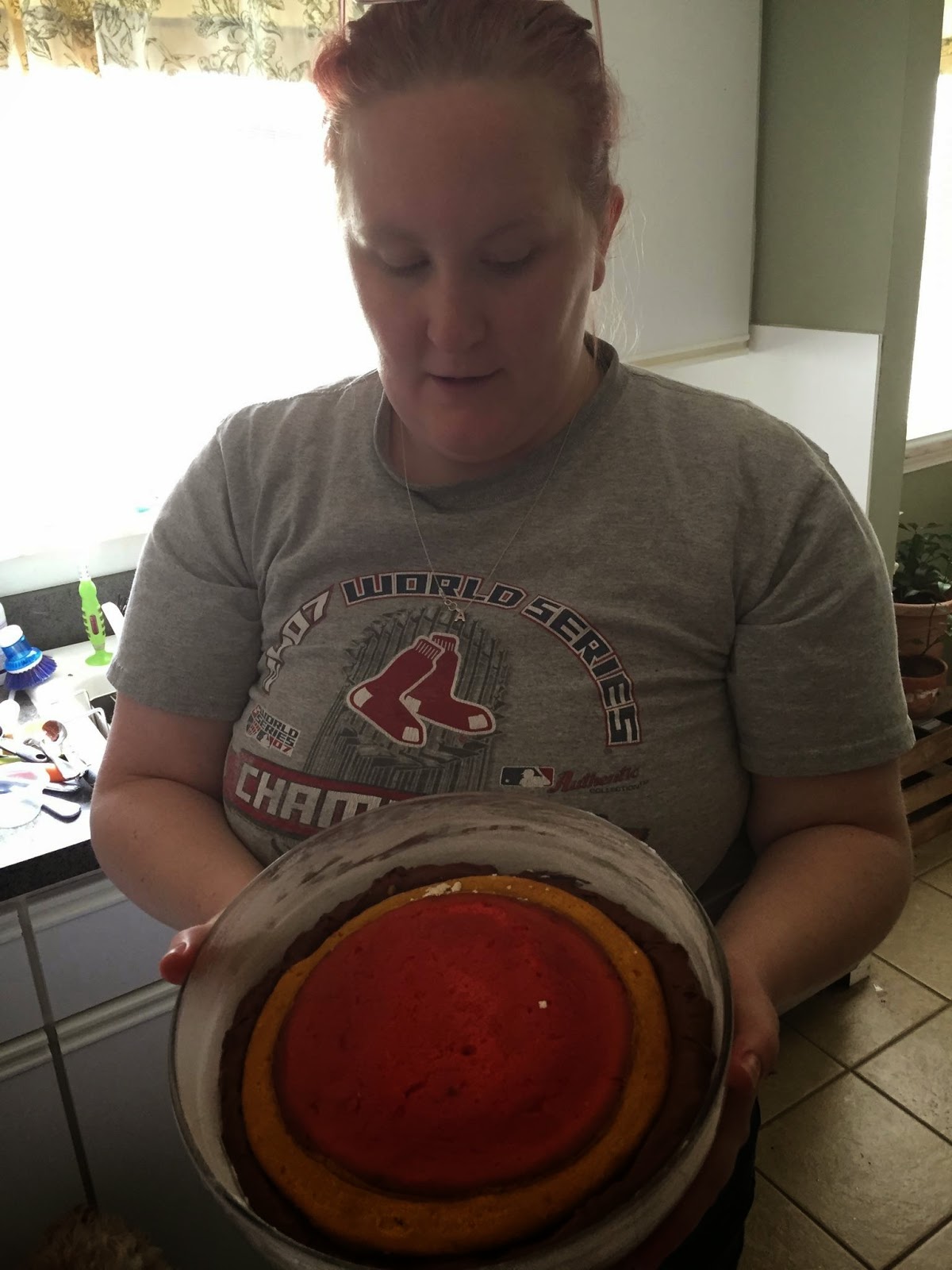 I followed the same procedure the original creator did, but doubled it. I started by making a dense and moist yellow cake that I dyed red and baked in a small glass bowl. When it was done, I popped it out, waited for the bowl to cool and did the other half of the batter. Each set of 2 cakes took one batch of cake batter. After the red hemispheres were cool, I got a slightly larger glass bowl, put in yellow cake batter dyed yellow (go big or go home) and put half in the bowl. I pressed one red hemisphere into the yellow cake batter until it came up around the sides, then baked it (for a loooong time--I ended up covering the bowls with foil after the first fifteen minutes so the tops wouldn't burn). The raw cake was in a thin layer, but heavily insulated by the cooked cake, so it took a long time to bake--more than 45 minutes for each new layer. After I had two red hemisphere cakes coated in yellow cake baked and cooled, I made chocolate cake batter and followed the same procedure. This third layer needed even longer to cook (and to be honest, I never did figure out a great way to make sure that the most insulated part at the very bottom of the cake was completely cooked. (that's my way of saying that when we finally journeyed to the center of the earth, we found it a little runny). 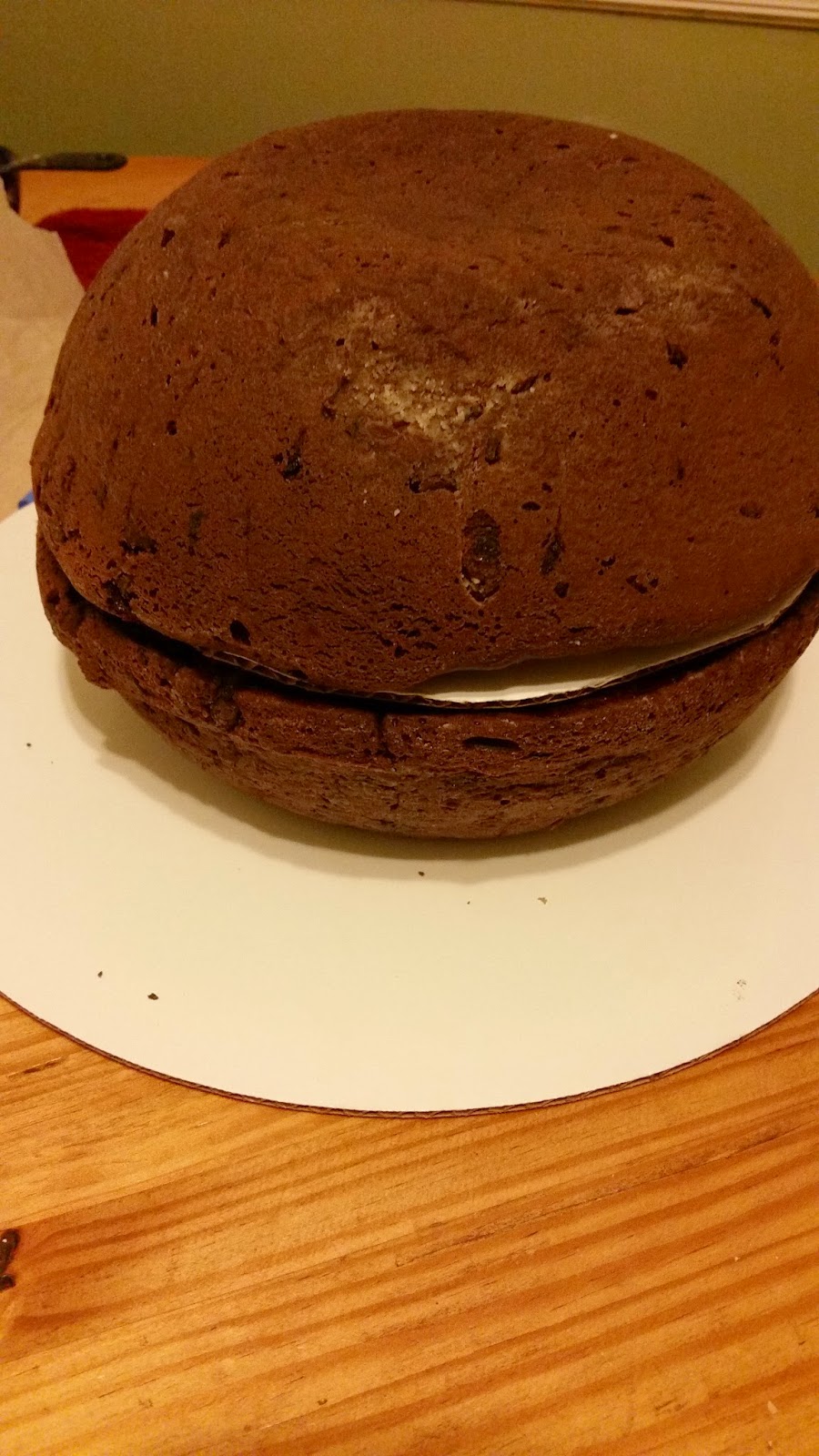 So I had two hemispheres of red coated in yellow coated in brown. (I felt like I took more pictures of my preparation than this but apparently not.) I was really nervous about sticking the two hemispheres together because I was sure they would collapse. To avoid that, I employed a structural support system (i.e. straws and cardboard). I flipped one hemisphere over so it was in it's southern hemisphere orientation. When it didn't immediately disintegrate, I stuck one straw in the middle and a straw in every quadrant of the cake, then trimmed them so they were even with the height of the cake. Then I cut a circular cardboard cake board into a smaller circular cardboard cake board, stuck that on top of the southern hemisphere and topped it with the other cake. By that point, I was secure enough in the cake's structural stability that I didn't do anything to stabilize the northern hemisphere. I just slapped it on there! 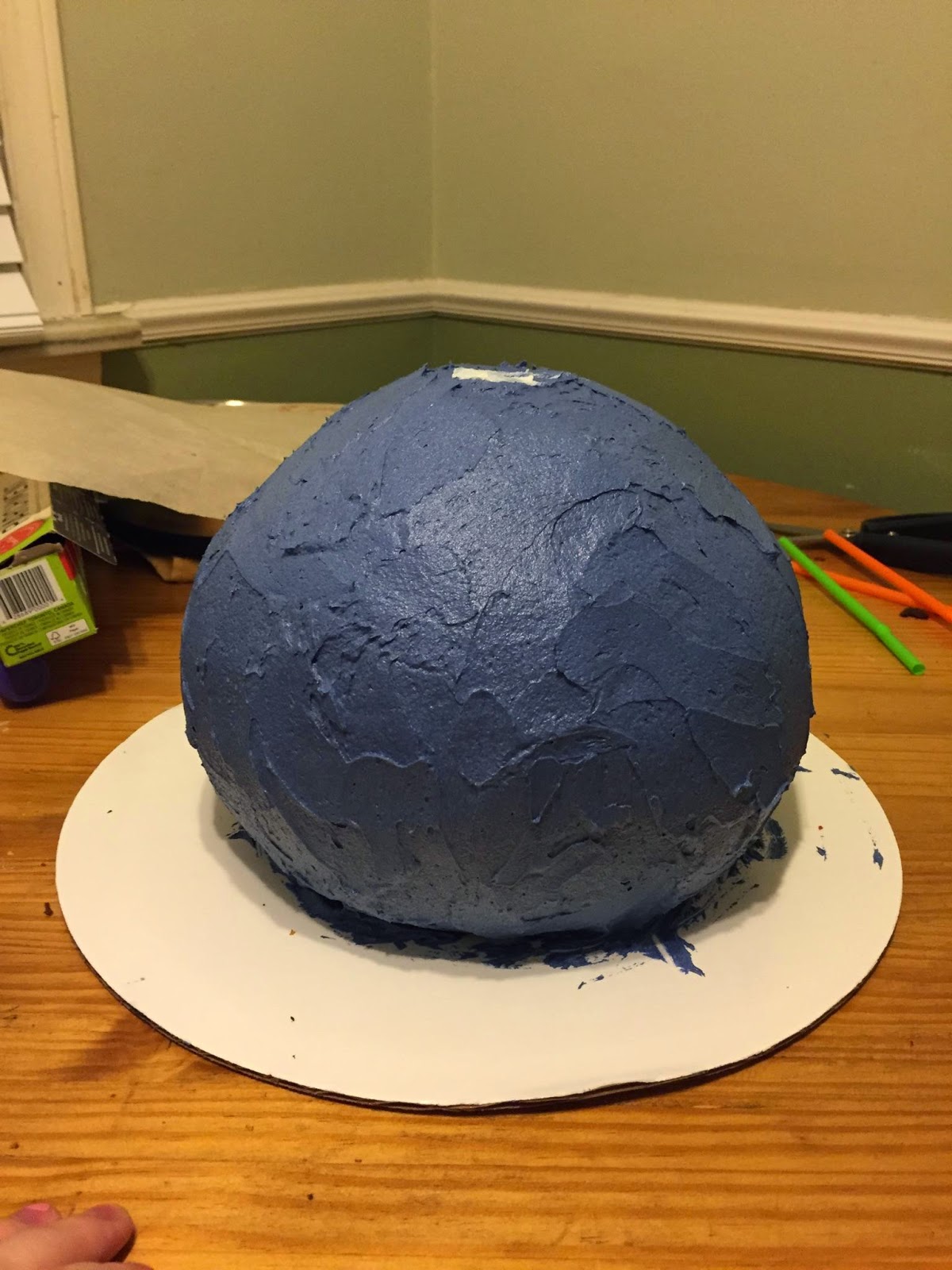 Then I made the ocean. I like working with frosting and not fondant because it just tastes better (Kate wanted frosting anyway) so mine doesn't look as polished as the original creator's. 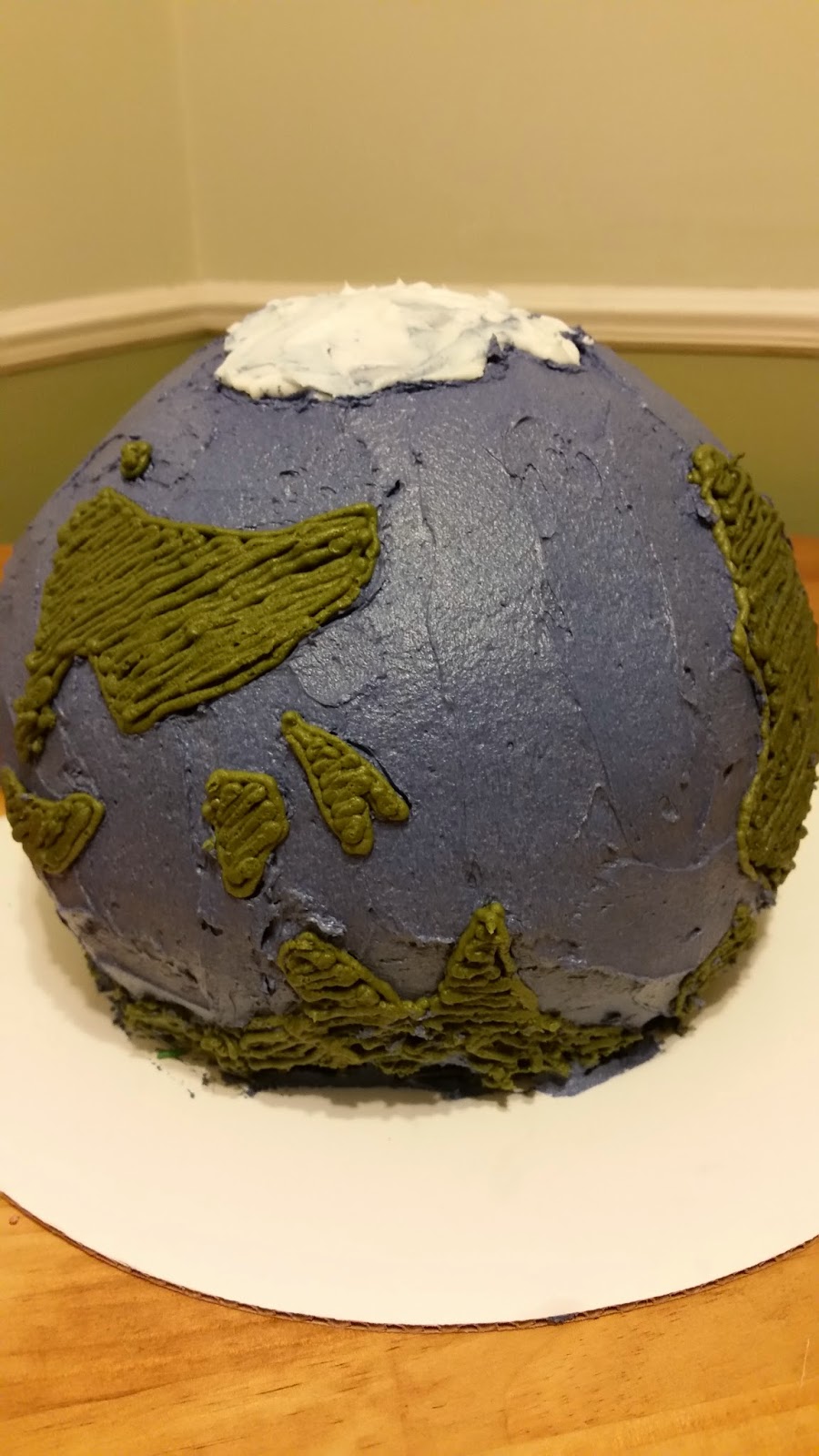 I added continents. Because the woman who designed the original cake is Australian, I made the cake from an Australian globe perspective in homage. This would have been a better idea if I had the spatial acuity to figure out where the other continents go if Australia is on top. By the time I finished, I realized I was going to have to put the North Pole right on the equator on the other side of the globe. 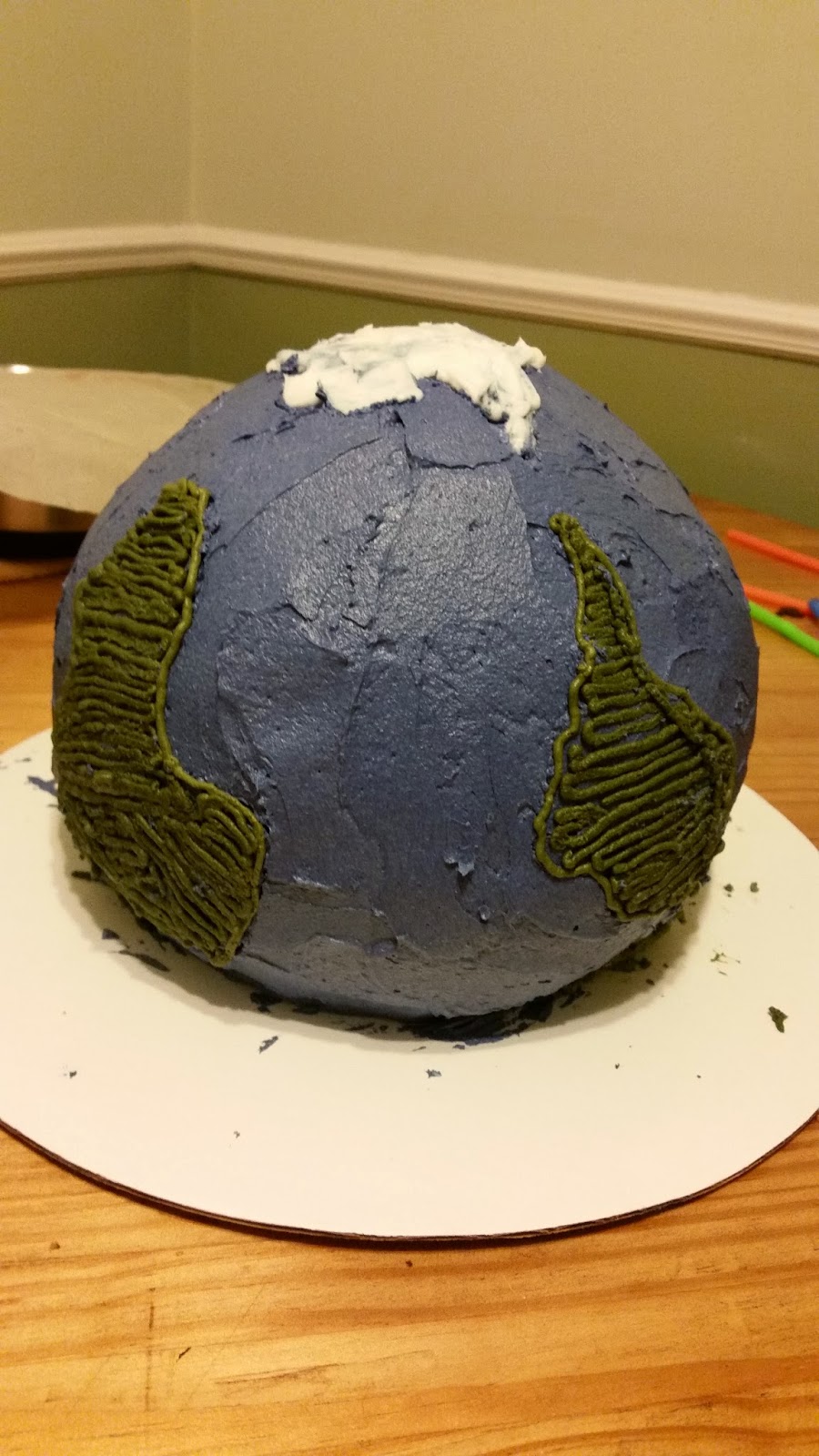 In doing this cake, I realized that the earth is a big place.This is the cake rotated about one-third from the picture above. My spatial issues worked latitudinally as well as longitudinally, so if you rotated this globe another third, you would find a vast unexplored ocean with no land masses at all. 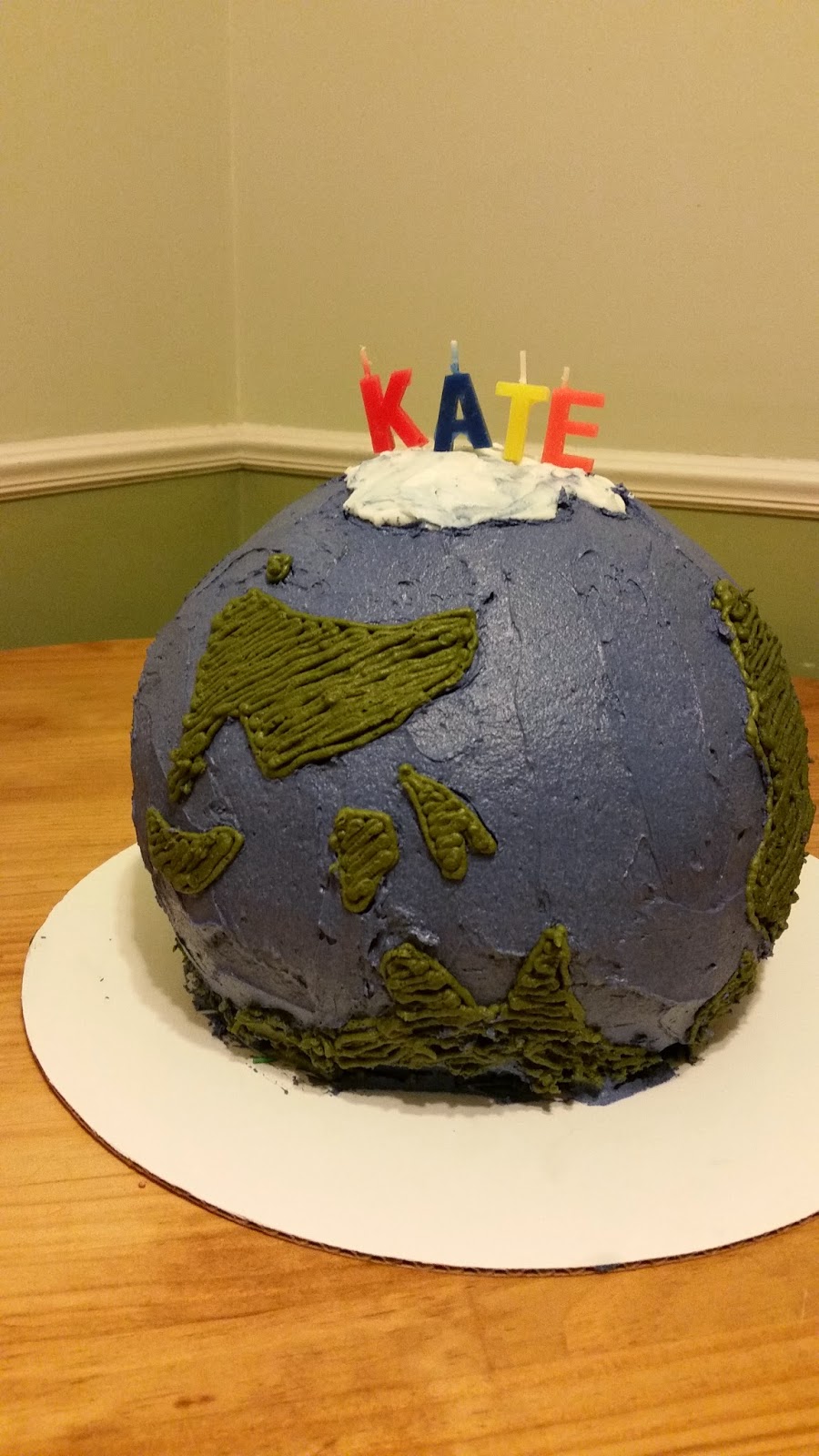 Kate's King of the World!! 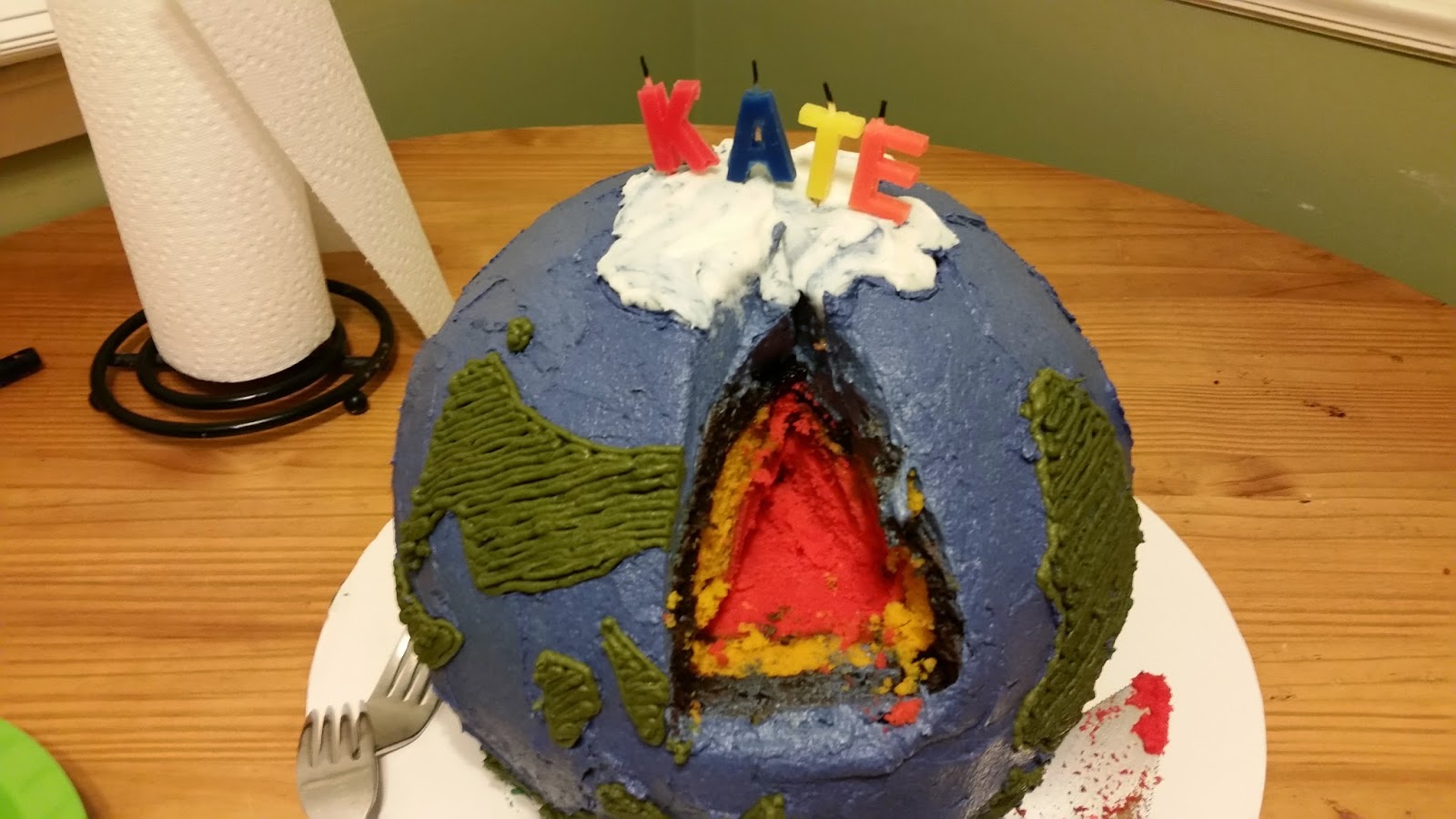 I was really pleased with how it turned out. Next time, I'm just doing Pangaea. 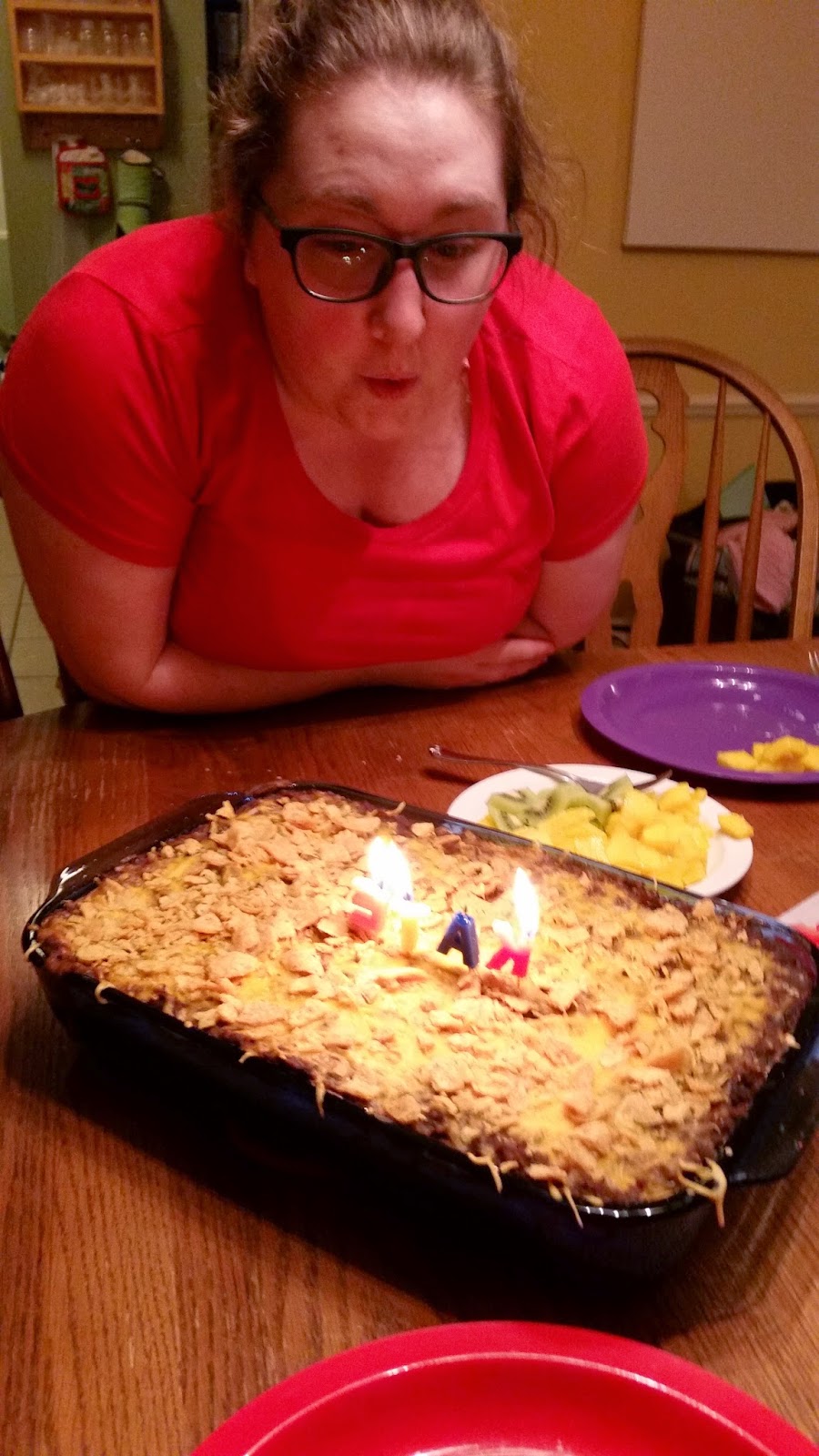 Happy Birthday, Kate! We love you! (and we will continue putting your Kate candles on everything until they're totally burned to nothing). That is a burrito casserole in that picture. It was wicked good. Recipe is here.

It is possible that I am so tired I am about to die. So, goodnight. I hope I didn't leave the Kate candles burning somewhere.
Posted by Anne at 9:20 PM