The Leak that Ate My Basement

Over the past two weeks, I've learned a very important lesson: If you are sitting in your downstairs bathroom and hear a strange drip noise that you can't quite locate, it's time to pack up and head for the hills.

Sadly, the most exciting parts of this story don't have pictures, mainly because there was too much screaming and crying going on to reach for the camera, so bear with me as I paint a picture with my words.

So the day after I'd first noticed the strange drip, drip noise, I was back on my favorite downstairs toilet. Thank goodness, thought I, that strange drip noise has gone away! It must have been outside after all. My satisfaction at a logical reasoning job well done was short-lived however and my smile evaporated (no pun intended) when I yet again heard a clear DRIP. My business concluded I crept onto the basement landing and peered around for a cause. DRIP. It was clearer now and I began descending the stairs with mounting trepidation. DRIP. I vaguely wondered if an evil serial killer was making this noise to lure me downstairs and kill me. DRIP. Surely the chickens in the next room would make some kind of warning noise if their mommy was about to be murdered. DRIP. A drop landed right at my foot and I looked up and decided to run away from home. The ceiling above me was drooping in, big, wet drops slowly forming and slipping away from the crack at its lowest point and tumbling down to splatter on the last bit of non-Greta-ruined carpet in the house.

I remember saying something that we'll assume was "dearie me!" before I ran into the unfinished basement, grabbed a screwdriver and an old food storage bucket that still had a cup or two of cocoa powder coating the bottom and ran back to face the engorged ceiling. I slammed the bucket on the carpet under the drip and bravely punctured the leak, wondering if the whole house was about to come down on top of me. More exciting words slipped out as a gushing stream of water plowed out the hole and began to fill the bucket. It streamed and streamed, as I ran frantically to the maze of waterlines that line the ceiling of the unfinished basement and began randomly twisting spigots shut. When the stream tapered off, I got up the courage to increase the size of the hole, and was grateful I didn't get to drink from the fire hose.

In the time since my initial adventure, we called insurance, had house dryers come out and put fans in the basement. The house dryers cut open our ceiling and found "the cause."
So now we'll play a game: find the hole from the outside of the house. Ready.....GO!!
Give up? So did the house dryers. They stuck a clothes hanger through the hole from the inside to see where it would come out.
So by now you probably have some questions, like "wait--how did all the water get in there all the sudden if the leak is coming out perpendicular to the ground?" "you know, it hadn't rained for several days before the leak, so how...?" or my personal favorite, "why is the ceiling still leaking if it's not raining and I just patched up the 'leak'??"

Yes, we had just been given the clean bill of dryness health and I had just finished patching that hole to the point that it's the most stable part of the whole house, when I went down to check my work and realized the ceiling was still dripping. Long story short, I began ripping wet handfuls of plaster off the ceiling and revealed--one rafter over, this:

So...because this pipe was still leaking, I got out the trusty cocoa bucket, took a bunch of pics for insurance and we got to start over. Only now, we knew that the wall under the leak was also seriously waterlogged. Which is how this: 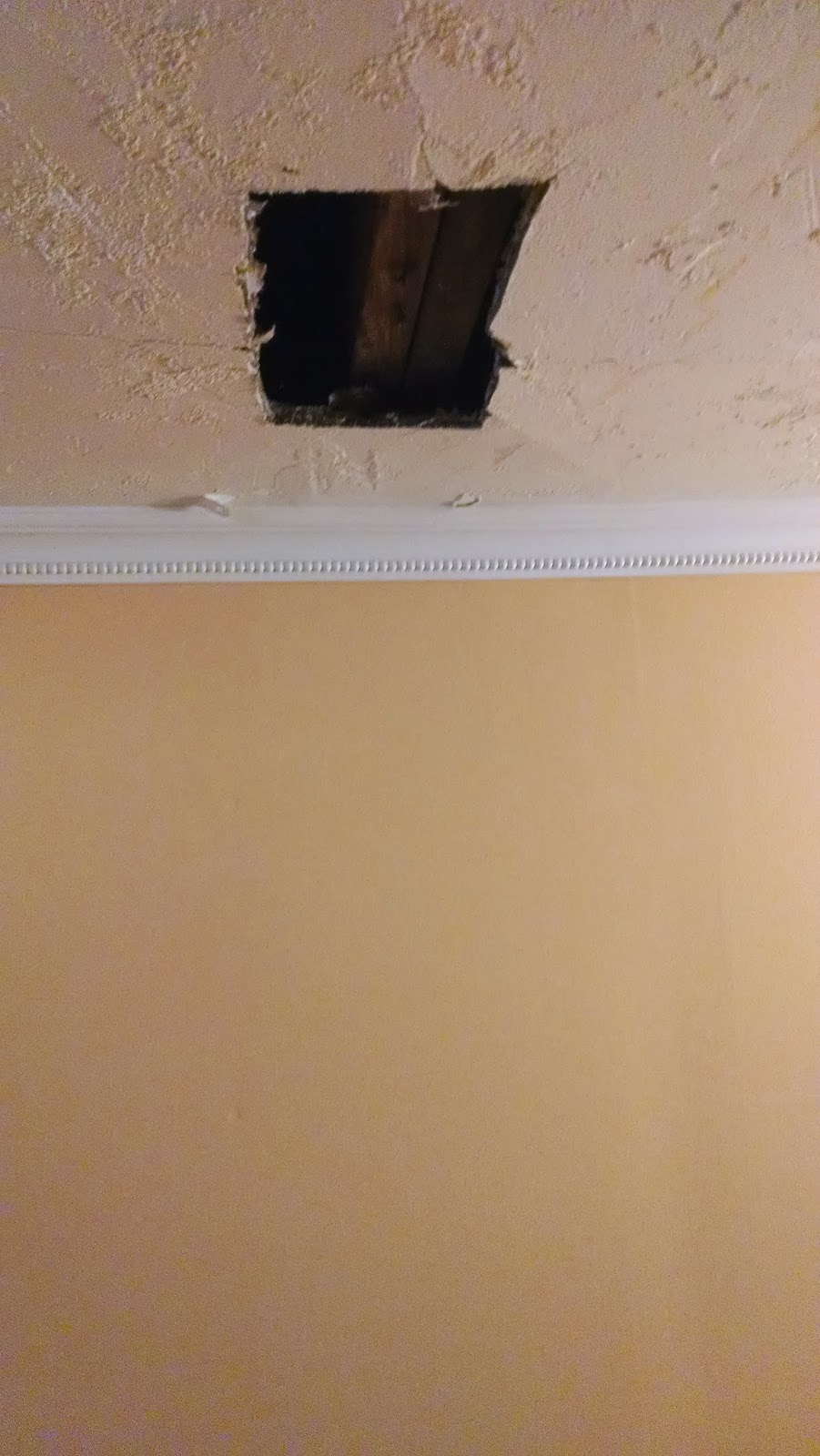 At this point, the leak has been fixed (plus a new washer inserted in the spigot outside to help things work better--the spigot issue was unrelated to the leak), everything has been re-dried with heavy duty fans and dehumidifiers. We're hoping a lot that insurance will cover this little project, especially fixing the plaster ceiling, but fortunately, they were able to recover all the wainscoting and trim from the wall before they took it down, so that repair (though it will be horrible) will not be the end of the world.

Now, because I'm sad because my house now has a weird scary crypt corner in the basement, I leave you with Greta's storyline for the past couple of weeks.
﻿﻿ Greta's fifth birthday was April 5th, and my wonderful sister sent a giant Lambchop dog toy to celebrate. Greta loved him, maybe more than he could handle...
I want to say this is just how Greta plays, that's she's probably not an evil psychotic murderer, but then I saw the way that she had plucked off his eyes and left them stacked neatly in a corner.

Until next time (as long as Greta doesn't get to us).

You are a storyteller. Riveting. And spooky. I may have nightmares.

This is both terrible and hysterical. I'm sorry about your leak, that happened to us too and now we have a creepy room in our basement instead of a nice guest room. James Cameron needs to watch his back with you around, good thing you're not in the film business.