Adventures in Bottling and Distribution

So, we're not actually doing any bottling or distribution, but this week I called a local coca-cola bottler and a bottled beverage distributor for unrelated reasons.
I decided that since the chickens would be producing vast quantities of manure, we should use it on our garden and other plants. 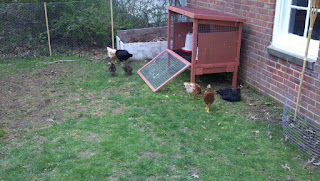 But it turns out you've got to compost it first or it'll burn the roots. I decided to look into getting a bigger composter than the bin we currently have. I found out how to make a compost tumbler using a big barrel and a frame to hold it. Like this one:
So then I looked into getting a big barrel. I found some on craigslist for a decent price, but then I read in a forum that coca-cola bottlers will usually give away (or sell for cheap) the 55 gallon barrels that the syrup comes in. I called up our local bottler and they said they sell them for $15, but the guy who handles it wasn't there. So I'll have to call them back.
Composting, wow, that's less exciting than I thought it would be. Maybe it would be better as a song:
We got a lot of chicken poop
It's pilin' really high
We hear it's good for vegetables
But raw poop makes them die
And so we search oh high and low
To see what we should do
We gotta figure what to do
With all our chicken poooooooooo...
Compost...
Compost...
That's what we've got to doooooooooooo...


We've been searching for a place to buy a case of boylan's root beer.  We had it once at the farmers market (from a soda farmer), and it was amazingly good, but it's not in any stores. This week we asked the soda farmer (or maybe they were an Asian fusion restaurant truck) where they get it from, and they said "Buckeye distributing". So I wrote them an email asking if we could buy a case from them. Tune in next time for the exciting conclusion...
Posted by Brandon at 10:39 AM

If you really want good root beer, you should order it from Shipyard Brewing Company in Portland, ME. They brew their own -- it's not carbonated...it's fermented. It's so good.


Tremendous issues here. I am very happy to see your article. Thanks a lot and I am having a look forward to contact you. Will you kindly drop me a e-mail? all of craigslist

Thank you so much for such an informative piece of information :)
If anyone interested similar one's have a look here
Besttoolsbrand